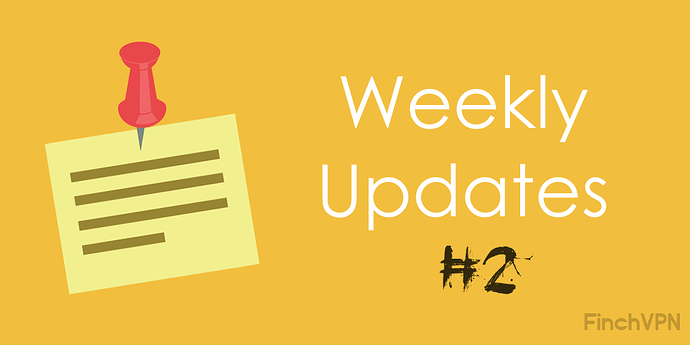 Giveaways
This week (12-18 October 2014) we have given away free 7 days Pro Plan to around 150 FinchVPN users, and 50 amount of 50% discount coupon. If you miss it, don’t worry we are giving away another 25 amount of 25% discount coupon for reader that are reading this.The coupon code is “A67YJC2”, grab it fast before it’s too late

What is DPI?
Deep Packet Inspection is a form of computer network packet filtering that examines the data part (and possibly also the header) of a packet as it passes an inspection point, searching for protocol non-compliance, viruses, spam, intrusions, or defined criteria to decide whether the packet may pass or if it needs to be routed to a different destination, or, for the purpose of collecting statistical information. - read more

We are working on new feature that prevent some DPI technique used by your Internet Service Provider (ISP) or governments to do surveillance and censorship.

FinchVPN Anti DPI will attempts to circumvent the current technology being used to block VPN’s in countries with very restrictive firewalls, by transforming the OpenVPN traffic fingerprint to looks like innocent data packet, so that DPI will not able to detect you are using OpenVPN, however more advance DPI will be able to detect our Anti DPI, but it will require them to do some heavy lifting to detect our Anti DPI.

While it is impossible to ‘see’ the data in an encrypted VPN tunnel, increasingly sophisticated firewalls are able use Deep Packet Inspection (DPI) techniques to determine that encryption is being used (to detect for example the SSL encryption used by OpenVPN).

If your ISP blocked OpenVPN connection, you can try connect using PPTP at the moment until we announce anti DPI feature.

Rotating IP (The Onion Ring)
We will introduce a new feature for beta test soon, we called it “The Onion Ring”, you will be connecting to FinchVPN onion server. Your VPN IP address will be automatically changed every 1-5 minutes.

Drawback - For HTTPS websites that are using SPDY protocol will maintain the IP address until the connection ended.

Software/Apps
There’s a lot of bug fixes and improvement, some of the changes we would like to mention is :
Our Android app are now officially supported on Android Lollipop (Android L) (5.0)
Our Windows app had been improved with some more stability and the ability to auto reconnect after your VPN session got disconnected.

We are looking for translator who will like to help us translate FinchVPN android app to your own language, jump on board and start translating now.

The expected release date for new Windows and Android app will be around 22 October - 26 October 2014.